The State Hermitage is a world famous museum of art and culture. It is one of the largest and oldest museums of the world. Catherine the Great founded it in 1764. The State Hermitage has been opened to the public since 1852. The collections occupy a large complex of historic buildings along Palace Embankment, including the Winter Palace, a former residence of Russian emperors, Small Hermitage, Old Hermitage and New Hermitage. Its collections, of which only a small part is on permanent display, comprise nearly 3 million items. The collection of paintings ranks among the largest in the world. Among the Hermitage's treasures, there are artworks by Leonardo da Vinci, Raphael, Michelangelo, Titian, fine things by Rembrandt and Rubens, famous collection of impressionists and post- impressionists, Matisse and Picasso. World- renowned are the collections of Scythian gold and antiquities from the Black Sea North Littoral. The history of the collection. 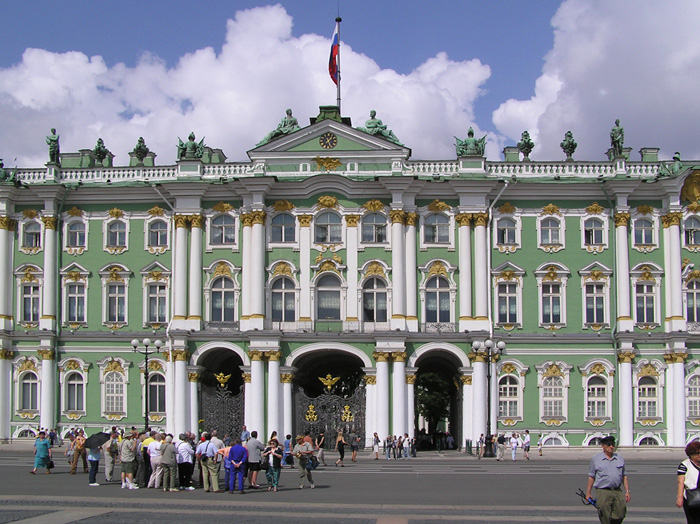 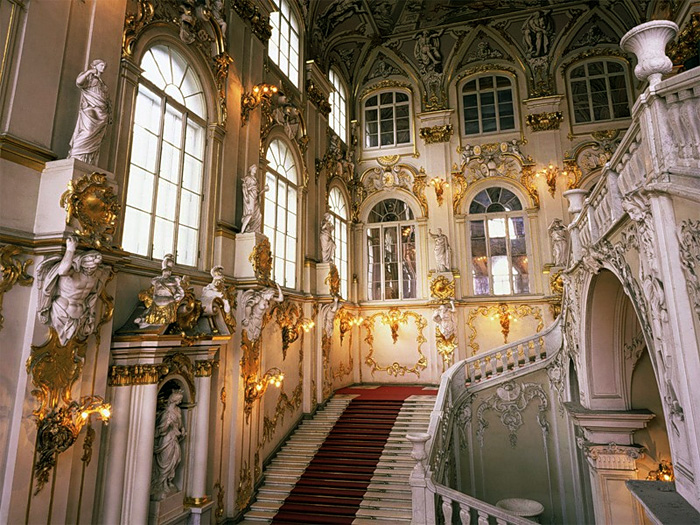 In 1764 Catherine the Great commissioned to build an extension of the Winter Palace, which was her winter residence to place her brilliant collection. The work was completed in 1766. Later it became the Southern Pavilion of the Small Hermitage. In 1767-1769 French architect Jean-Baptiste Vallin de la Mothe built the Northern Pavilion on the Neva embankment. In 1767-1775 the extensions were connected to each other by galleries and Catherine the Great put her collections there. The entire neoclassical building is now known as the Small Hermitage. At the time of Catherine the Great the Hermitage wasn't a public museum, very few people were allowed within. 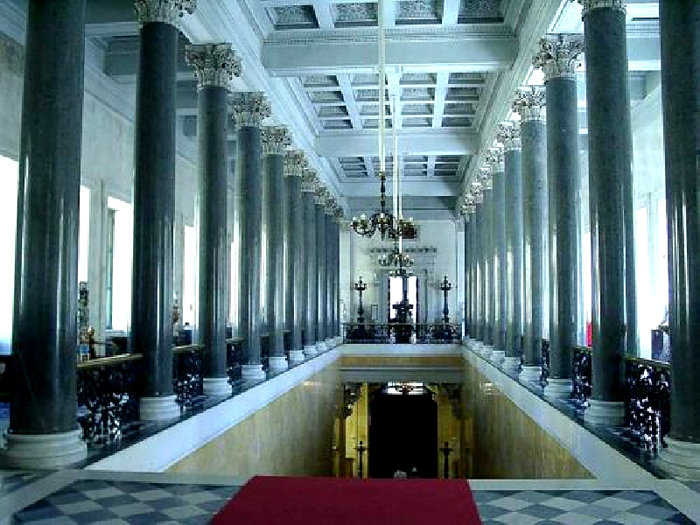 The collection soon overgrew the building. In her lifetime Catherine acquired 4,000 paintings from the old masters, 38,000 books, 10,000 engraved gems, 10,000 drawings, 16,000 coins and medals and a natural history collection filling two galleries. As a result in 1771 she commissioned Yury Velten to build another major extension. The neoclassical building was completed in 1787 and has come to be known as the Large Hermitage or Old Hermitage. Catherine also gave the name of the Hermitage to her private theatre. It was built nearby between 1783 and 1787 by the Italian architect Giacomo Quarenghi. In 1787 in London Catherine acquired the collection of sculpture that belonged to Lyde Browne, mostly Ancient Roman marbles. Catherine used them to adorn the Catherine Palace and park in Tsarskoye Selo. Later they became the core of the Classical Antiquities collection of the Hermitage. In 1787-1792 Quarenghi designed and built a wing along the Winter Canal with the Raphael Loggias. The idea was to replicate the loggia in the Apostolic Palace in Rome designed by Donato Bramante and frescoed by Raphael. The loggias in Saint Petersburg were decorated with copies of Vatican frescoes painted by Cristopher Unterberger and his workshop in the 1780s.

In 1815 Alexander I of Russia purchased 38 pictures from the heirs of Jos?phine de Beauharnais. Most of them had been looted by the French in Kassel during the war. The Hermitage collection of Rembrandts was then considered the largest in the world. Also among Alexander's purchases from Josephine's estate were the first four sculptures by the neoclassical Italian sculptor Antonio Canova. Eventually the imperial collections were enriched by Greek and Scythian artifacts excavated within the Russian Empire. In 1851 in Venice the museum acquired the collection of Cristoforo Barbarigo, including five more canvases by Titian In 1838 Nicholas I commissioned the neoclassical German architect Leo von Klenze to design a building for the public museum. The New Hermitage was opened to the public on 5 February 1852. In the same year the Egyptian Collection of the Hermitage Museum emerged, and was enriched by items given by the Duke of Leuchtenberg, Nicholas I's son-in-law. 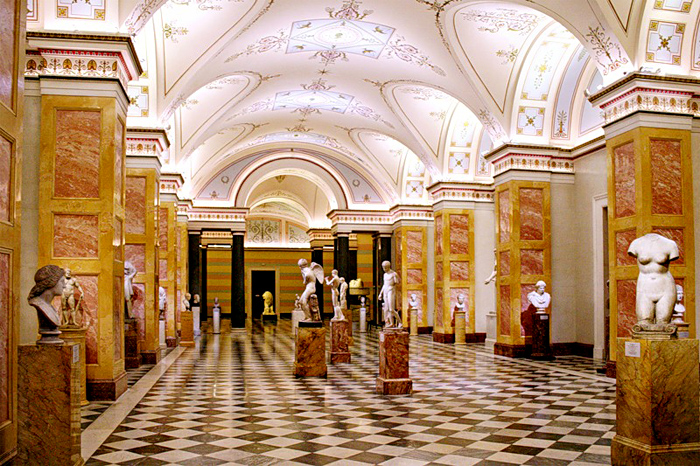 In 1861 the Hermitage purchased from the Papal government part of the Giampietro Campana collection, which consisted mostly classical antiquities. The Hermitage acquired Madonna Litta, which was then attributed to Leonardo, in 1865. Raphael's Connestabile Madonna was bought in 1870. In 1884 in Paris Alexander III of Russia acquired the collection of Alexander Basilewski, featuring European medieval and Renaissance artifacts. In 1885 the Arsenal collection of arms and armour, was transferred from the Catherine Palace of Tsarskoye Selo to the Hermitage. In 1914 Leonardo's Benois Madonna was added to the collection. 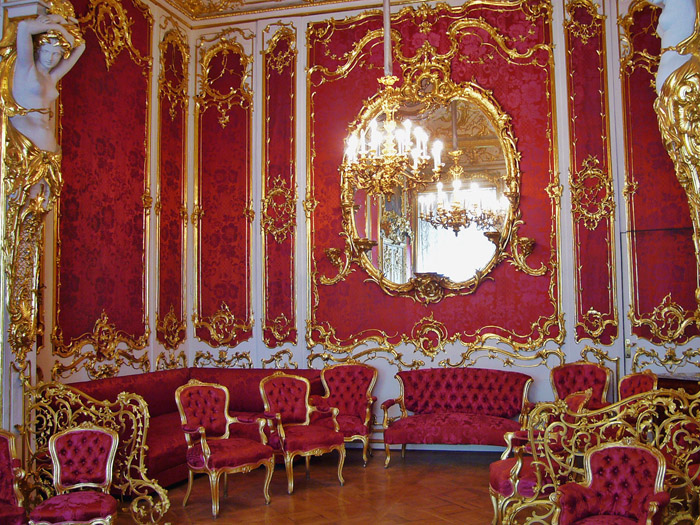 Immediately after the Revolution of 1917 the Imperial Hermitage and Winter Palace, former Imperial residence, were merged and proclaimed The State Hermitage. 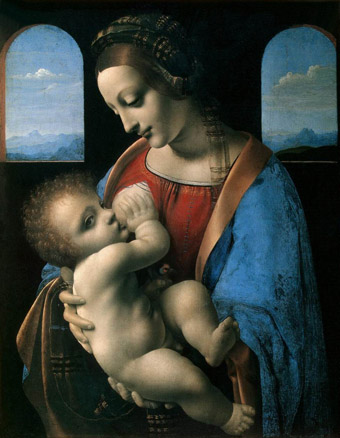 The range of the Hermitage's exhibits was further expanded after private art collections from several palaces of the Romanov family and numerous private mansions were being nationalized.

In 1922 an important collection of 19th-century European paintings from St. Petersburg Academy of Arts was transferred to the Hermitage. In turn, in 1930s some works of art were sent to new museums all over the Soviet Union. In 1928, the Soviet government ordered the Hermitage to compile a list of valuable works of art for export. In 1930-1934, over two thousand works of art from the Hermitage collection were sold at auctions. The sold items included Raphael's Alba Madonna, Titian's Venus with a Mirror, Botticelli's Adoration of the Magi of 1475, and Jan van Eyck's Annunciation masterpieces by Rembrandt, Van Dyck. In 1931, after a series of negotiations, 21 works of art from the Hermitage were acquired by Andrew W. Mellon. Later he donated them to form a nucleus of the National Gallery of Art in Washington, D.C.

In 1948 316 works of Impressionist, post-Impressionist and modern art from the collection of the Museum of New Western Art in Moscow were transferred to the Hermitage, including works by Matisse and Picasso. In 1967, a number of works by Matisse were donated to the museum by his muse Lydia Delectorskaya. In 1991 it was revealed that some paintings looted by the Red Army in Germany in 1945 had been in the Hermitage. Only in October 1994 the Hermitage officially announced that it had been secretly holding a trove of French Impressionist and Post-Impressionist paintings. The exhibition "Hidden Treasures Revealed, was opened on March 30, 1995. All but one originated from private rather than state German collections, including 56 paintings from the Otto Krebs collection, Bernhard Koehler, Otto Gerstenberg and some other collections. The world-famous Place de la Concorde by Degas, In the Garden by Renoir, White House at Night by Van Gogh are now on permanent display in several small rooms in the northeastern corner of the Winter Palace. 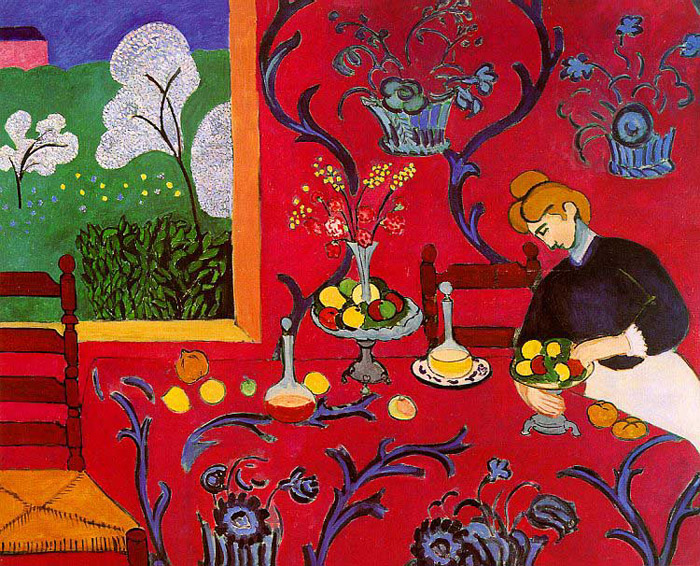 In 1993 the eastern wing of the nearby General Staff Building was given to the Hermitage. New exhibition rooms were opened there in 1999. Since 2003 the Great Courtyard of the Winter Palace has been opened to the public. It provides another entrance to the museum. In 2003 the Museum of Porcelain was opened as a part of the Hermitage on the basis of the Imperial Porcelain Factory.