Cruiser "Aurora" was launched in St Petersburg in 1903, and first saw action in the Russian-Japanese war of 1904-1905. She participated in WWI.

The Cruiser is famous for the special role it played in the Bolshevik Revolution of 1917. On the eve of the revolution, the night of October 25, 1917, the "Aurora", whose crew had sided with the revolutionaries, sailed up the Neva and was moored at a bridge not far from the seat of the Provisional Kerentsky government which was in Winter Palace. From there, at 9:45 in the evening, the cruiser fired the famous blank shot which was the signal to start the storming the Winter Palace. 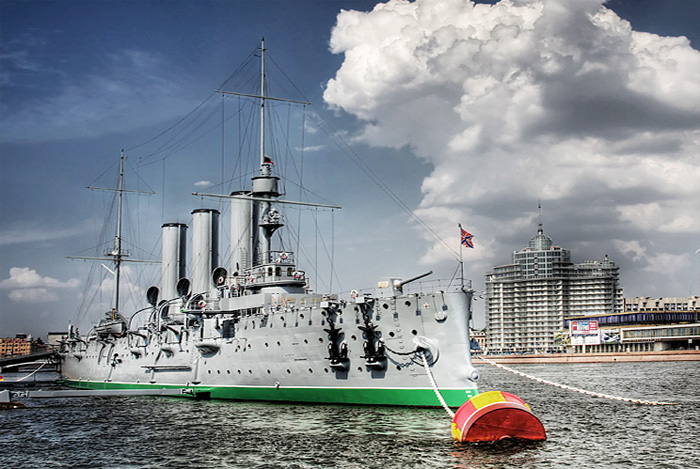 "Aurora"'s radio was the first to broadcast the appeal of The Revolutionary Military Committee "To the Citizens of Russia" and thus announced the victory of the revolution of 1917 in Russia.

The foregun which gave the signal shot is still there and has a memorial plaque on it. A cruiser of the Russian Navy put on eternal mooring. The museum on board illustrates the Aurora's participation in the Battle of Tsushima in the Russo-Japanese War of 1904-1905, revolutionary events of the early XX century, and the World War II, 1941-1945.