The Kunstkamera was the first museum in Russia. Established by Peter the Great and completed in 1727. Kunstkammer Building hosts the Peter the Great Museum of Anthropology and Ethnography. It is the collection of almost 2,000,000 items. Peter's museum was a cabinet of curiosities dedicated to preserving "natural and human curiosities and rarities". It was a very typical type of collection in the period of Peter the Great's time. The tsar's personal collection, originally stored in the Summer Palace, features a large assortment of human and animal fetuses with anatomical deficiencies.

Peter the Great had seen kunstkammers for the first time in 1697 visiting Frederick Ruysch and Levinus Vincent. The underlying idea of their kunstkammers was to acquire full knowledge of the world. 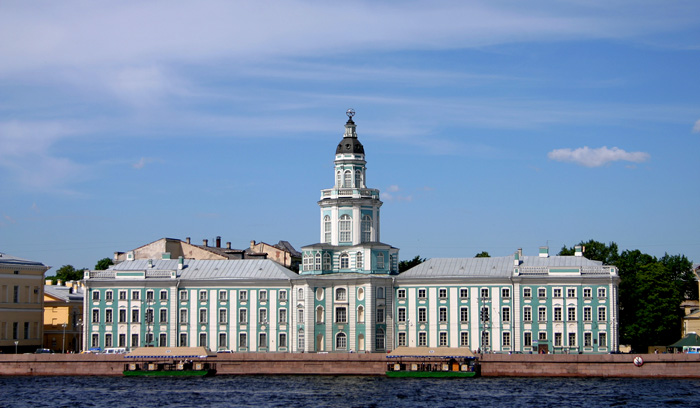 Peter's main interest was in "naturalia", rather than the so-called "artificialia". Peter encouraged research of deformities, all along trying to debunk the superstitious fear of monsters. He issued an ukase ordering malformed, still-born infants to be sent from all over the country to the imperial collection. He had them put on show in the Kunstkamera as examples of accidents of nature.

In 1716 Peter established the mineral cabinet of Kunstkamera, depositing there a collection of 1195 minerals. The nuclear of the collection he had bought in Europe and then it was enriched with Russian minerals.

Many items were bought in Amsterdam from pharmacologist Albertus Seba (1716) and anatomist Frederik Ruysch (1717) and formed the basis for the Academy of Sciences. The Kunstkamera was specially built to house these two extensive collections. One more acquisition came from Jacob de Wilde, a collector of gems and scientific instruments.