This museum is located in the house where the famous Russian opera singer by the name of F.I.Shalyapin lived. The possessor of a large and expressive bass voice, he enjoyed an important international career. He performed at major opera houses and is often credited with establishing the tradition of naturalistic acting in his chosen art form.

Shalyapin lived in this particular residence from 1914-1921. The museum was opened, after extensive restorations, on the 125th anniversary of Shalyapin's birth. Today, the exhibition consists of personal items, documents, photographs, theatrical costumes, and scenery sketches pertaining to the singer's life. "The Great basso"as they call Shalyapin, was well-known over all Russia and Europe. He continued to perform on stage of the the Bolshoi Theatre and Mariinsky Theatre.

The singer was on friendly terms with musicians, well-known artists. Now in museum it is possible to see traces of this friendship - walls of the big and small drawing rooms are filled with pictures from the singer's collection.

The apartment on Petrogradskaya Storona was a place of creative activity of Chaliapin. He prepared for performances, studied new musical parts and rehearsed scenes from opera performances together with other singers and actors here.

In many respects, the present layout of museum is obliged to secretary of Shalyapin - I.G. Dvorishchin. Leaving Russia Shalyapin took only a portrait of Kustodiev's work and he left all other things together with apartment in storage to his secretary.

It is commonly known Shalyapin lived his last 16 years in France and did not come to Russia anymore. However Dvorishchin who lived in apartment carried out his commission, kept all personal things, documents and collections of the singer. After the death of Dvorishchin the apartment of the singer passed to department of the Museum of Theatrical and Musical Art which took care of opening of apartment-museum in this building. 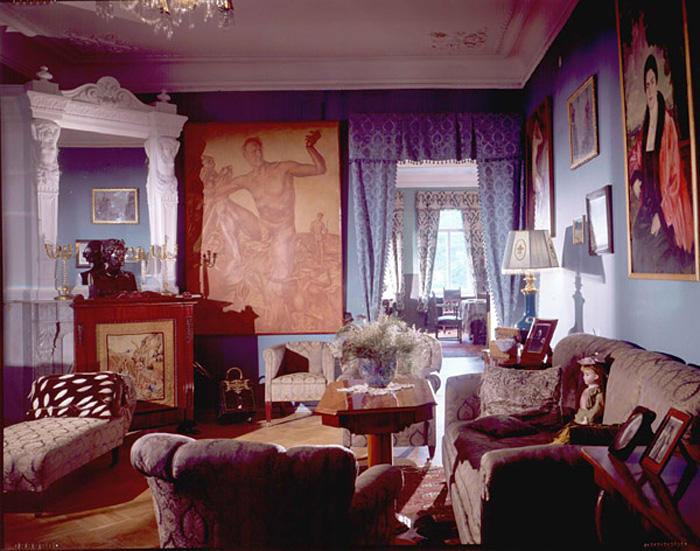 The museum exposition has theatrical suits of the well-known bass and scenery models to performances in which he acted. In second half of 20-th century the daughters of Shalyapin - Marfa and Marina donated to the museum the picture of Kustodiev. It was taken away by their father in emigration. In a museum it is possible to see weapon collection and the most part of furniture of Shalyapin. For example, grand piano which he engaged in singing and an english gramophone (victrola) on which the singer liked to listen to plates.