The Catherine Palace, located in the town of Tsarskoye Selo (Pushkin), 25 km south-east of St. Petersburg was the summer residence of the Russian tsars. The palace is a part of a marvelous ensemble of palaces and parks. It was almost totally destroyed during The Second World War. Now the palace is impressive post WWII reconstruction. The Catherine palace nowadays contains exclusive decorative objects, furniture, Russian and West-European paintings, unique collection of porcelain, amber, weapons, decorative bronze, sculptures, etc. 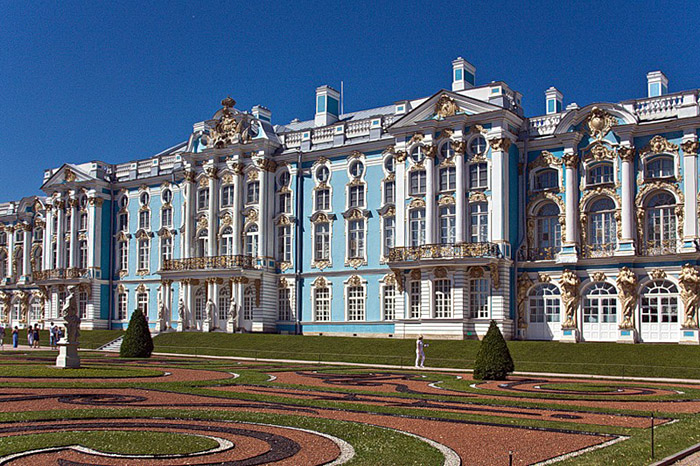 The residence originated in 1717, when Catherine I of Russia engaged the German architect Johann-Friedrich Braunstein to construct a summer palace for her pleasure. Empress Elizabeth, however, found her mother's residence outdated and in May 1752 asked her court architect Bartolomeo Rastrelli to demolish the old structure and replace it with a much grander Rococo style. During Elizabeth's lifetime, the palace was famed for its obscenely lavish exterior. More than 100 kilograms of gold were used to gild the sophisticated stucco fa?ade. It was even rumored that the palace's roof was constructed entirely of gold. In front of the palace a great formal garden was laid out. 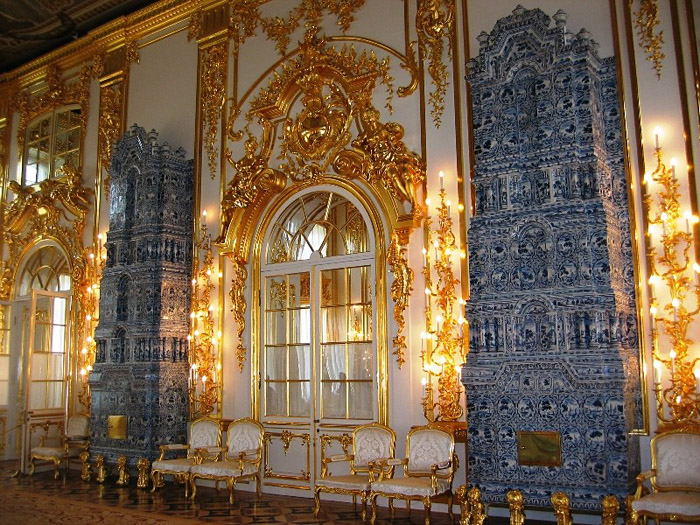 The next stage in the decoration of the palace came in the 1770s. The new mistress of the residence, Empress Catherine the Great, was fascinated with the art of the Ancient World and wanted to have her apartments finished in keeping with current tastes. She entrusted the task to the Scottish architect Charles Cameron, who was an expert on ancient architecture. The interiors that he created in the Zubov Wing and the North Part of the Palace are marked by refined beauty, austere decoration and especially exquisite finishing. The empress spent much money out of her own pocket on palace's reconstruction, without ever counting. 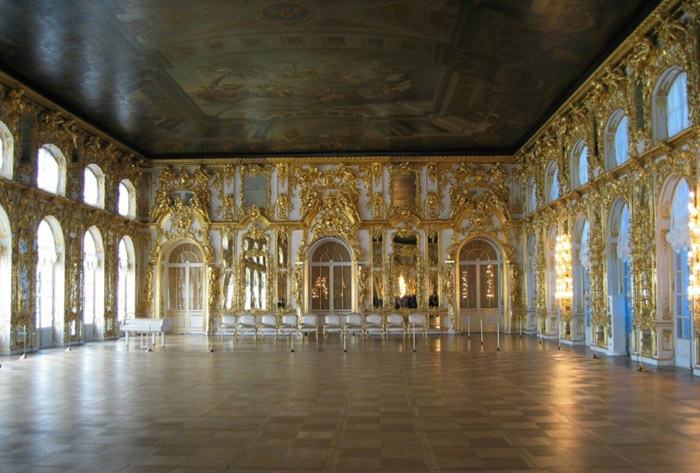 Although neoclassical interiors, added to the palace during the time of Catherine the Great, reflect the late 18th-century and early 19th-century taste, the palace is best known for Rastrelli's grand suit of formal rooms known as the Golden Enfilade. It starts at the spacious ballroom, the "Grand Hall" or the "Hall of Lights", with a spectacular painted ceiling, and comprises numerous distinctively decorated smaller rooms, including the reproduced Amber Room. 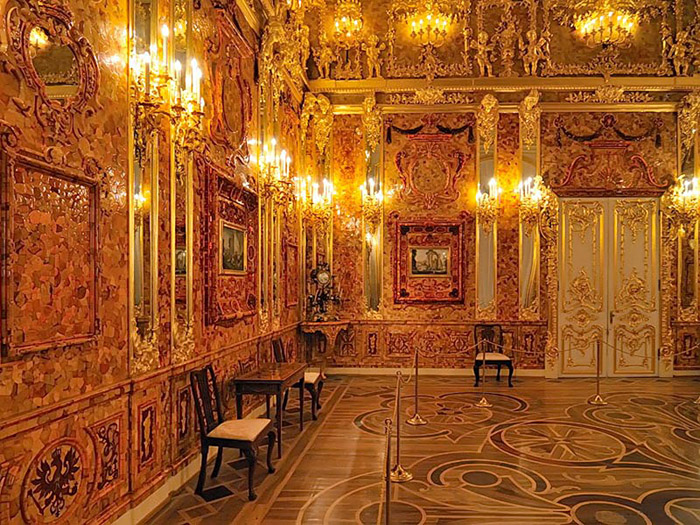 There is no doubt that the Amber Room is the most impressive room of 300 meters long Golden Enfilade. The amber room was used as a study. King Frederick William of Prussia gave Peter the Great the original inlaid amber panels after Peter admired them in a room in Frederick's palace. The 16-foot jigsaw-looking panels were constructed of over 100,000 perfectly fitted pieces of amber. The Nazis dismantled the amber panels and shipped them to Germany during World War II, and they have never been found. Much mystery surrounds the fate of the amber room panels, and many Russians believe that they still exist somewhere in Germany. Russian artists began recreating the amber panels using the old techniques in the early 1980's, and the room was opened to the public in 2003. 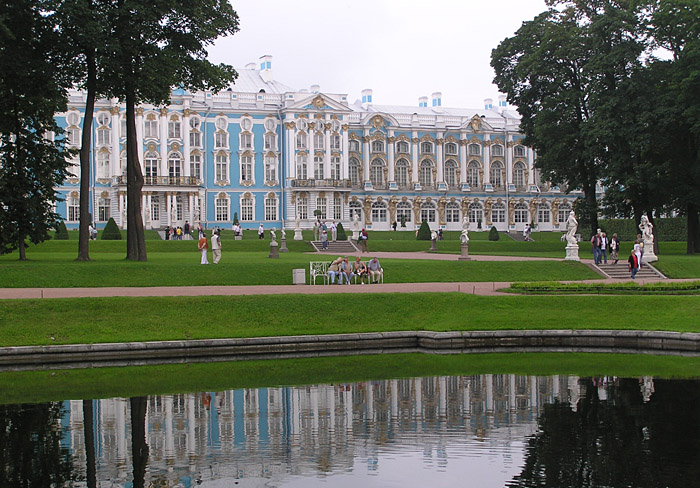 Catherine Park is a wonderful work of the Russian art of gardening from the 18th and 19th centuries, which combines the masterpieces of architecture with the beauty of the transforming nature of the north. 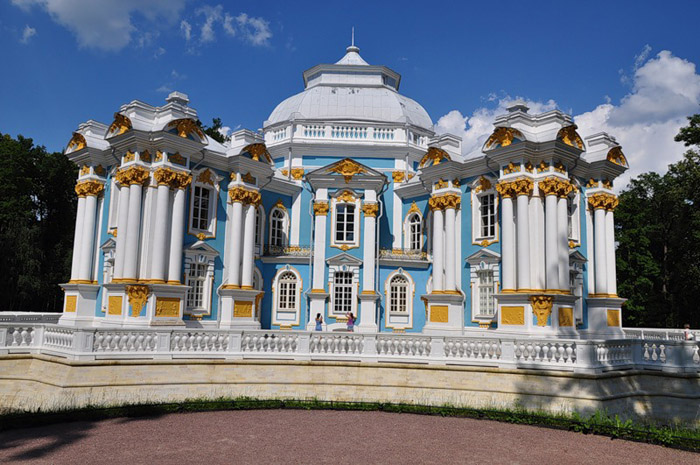 The Regular part of the park lies between the Catherine Palace, the Great Pond and the Cascade ponds. It has numerous entertaining pavilions created according to Rastrelli's design in the 18th century. Among them one can find The Upper Bath served as a bathhouse for the royal family. The interior decor was based on the Golden House of the Emperor Nero, which had been discovered during excavations in Rome. The Lower Bath was originally called the Cavaliers' Wash-House as it was used by the courtiers. Especially interesting The Hermitage Pavilion. It was meant for private dinners and parties without servants. In Elizabeth's time, it was surrounded by a moat with drawbridges. There were no stairs, and the guests came up in chair-lifts. The ground floor was occupied by the kitchen and pantry, and the first floor was the dining room itself. Five tables could be raised mechanically from the ground floor. There were slates on the tables, on which the guests could write their orders to the servants below. If the guests wished to dance, the tables could be lowered back to the ground floor and the dining room was converted into a ball-room. 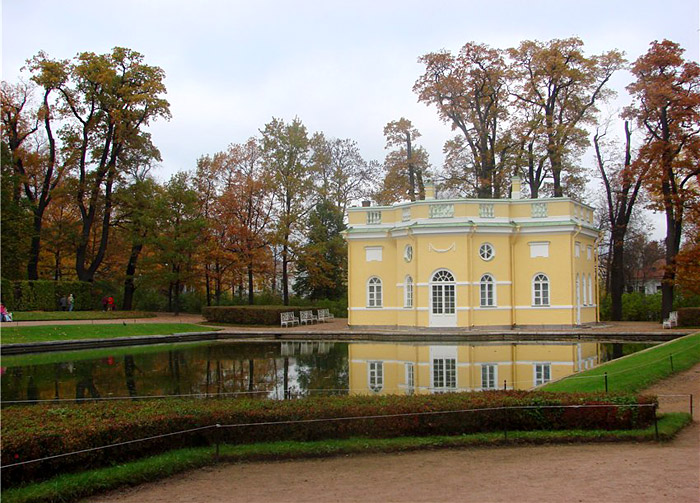 The neighboring to the Hermitage pavilion Grotto Pavilion Catherine the Great used to store antique works of art..The Agate Rooms is another pavilion designed by Cameron as a bathhouse. Its interior was faced with agate. There was a bathing pool on the ground floor, and the rooms of the first floor were elaborately decorated with different semi-precious stones. The classical building added to the Catherine palace is The Cameron Gallery which was named after the architect Charles Cameron who designed it. It was decorated with Portuguese and Russian copies of antique statues and busts of ancient philosophers, politicians and military leaders. 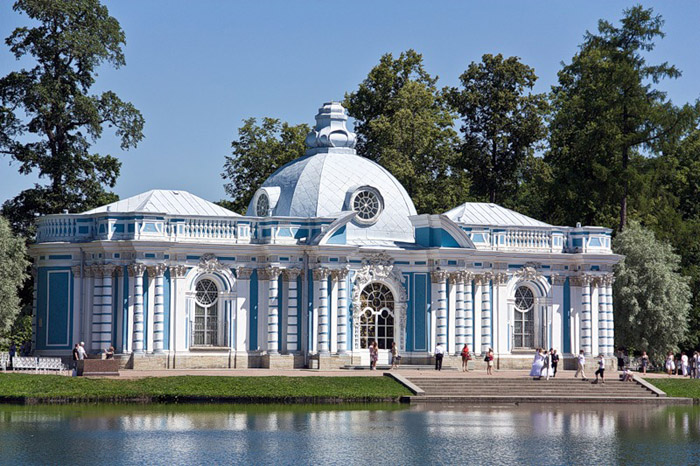 The landscaping part of the park was designed in the second half of the 18th century and is situated beyond the Cameron Gallery. During the same period of time, the park was being filled with architectural designs which revived the forms of military monuments of ancient Rome and the style of the medieval buildings as well as Chinese motifs. The compositional center of the landscaping part of the park is the Great Pond. 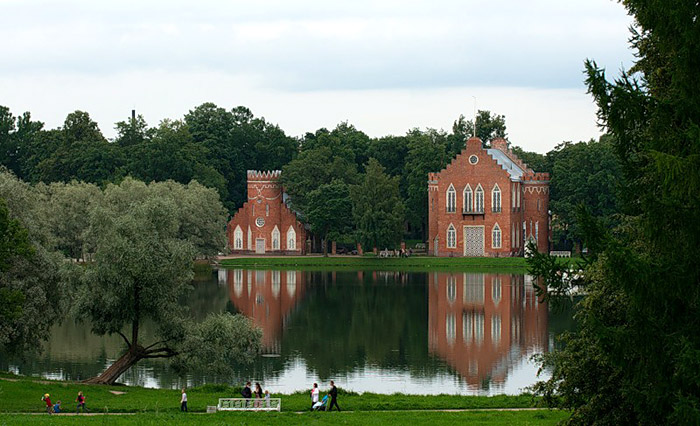 The Admiralty which stands on its bank was designed in Gothic style. Originally its ground floor was used to house a collection of boats including Indian canoes, Turkish kayaks, Venetian gondolas and other rowing and sailing boats. The guests could choose boats of any kind for the boating parties, which were held on the Great Pond. There is the Turkish Bathhouse built on the other bank of the pond. It was built to mark Russia's victory in the Russian-Turkish War of 1828-1829. The building, which actually did function as a Turkish bath, resembles a mosque.