The Grand Palace and Fountain Park in Peterhof

The brilliant palace and park ensemble of Peterhof, conceived and created at the will of Peter the Great as a counterpart of Versailles, is situated on the southern shore of the Gulf of Finland, 29 kilometers from St. Petersburg. For 200 years, it served as a summer residence of the Russian monarchs. In the 18th and 19th centuries it was a setting for majestic receptions, grand festivities, balls, concerts and masquerades. 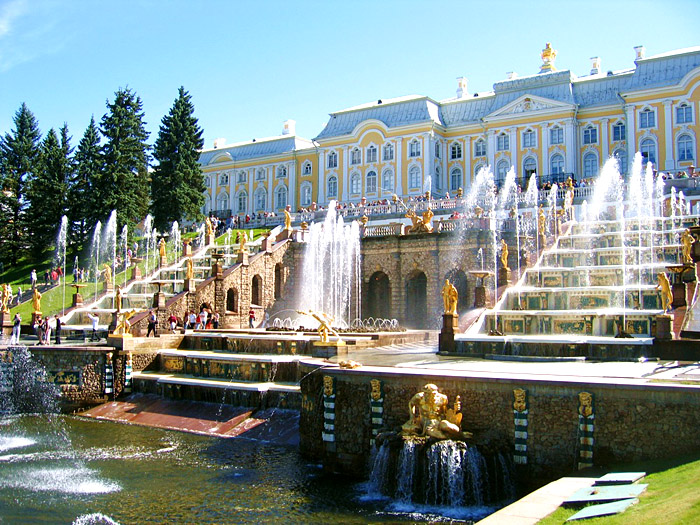 The dominant natural feature of Peterhof is a sixteen-meter-high bluff lying less than a hundred meters from the shore. The so-called Lower Park (Nizhny Sad), comprising the better part of Peterhof's land area, are confined between this bluff and the shore, stretching east and west for roughly 200 meters. The majority of Peterhof's fountains are contained here, as are several small palaces and outbuildings. East of the Lower Park lies the Alexandria Park with 19th-century Gothic Revival structures such as the Kapella.

The Peterhof ensemble includes the Upper and Lower Parks with 150 amazing fountains. Their system of water supply was unequalled for its time. It is indeed unique because fountains were designed according to the law of communicating vessels. The natural character of the territory made it possible to make such a clever, inexpensive water-supply system. 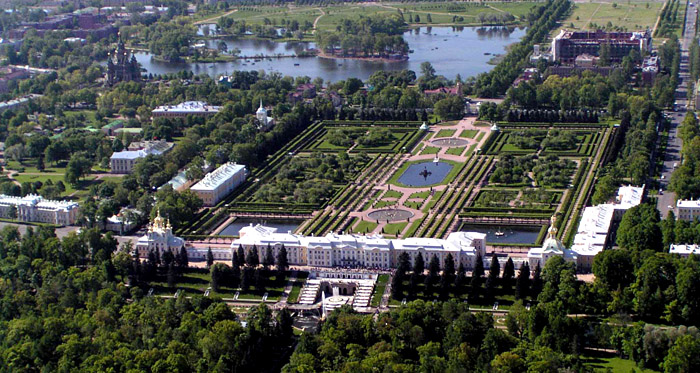 The Great Cascade is the central cascade of the park. The decorative motif of the Grand Cascade was to glorify Russia's victories in the Northern War against the Sweeds. The central statue of the cascade is Sampson tearing apart the mouth of a lion. The powerful figure of Sampson personifies the Russian people who defeated the Sweeds in the Northern war. The lion was part of the national emblem of Sweden. As a symbol of victory, a 60-feet jet of water spurts into the air from the lion's opened mouth

A lot of fountains located in the Lower Park exhibit an unusual degree of creativity. One of the most notable designs is entitled 'The Sun'. A disk radiating water jets from its edge creates an image of the sun's rays, and the whole structure rotates about a vertical axis so that the direction in which the "sun" faces is constantly changing. 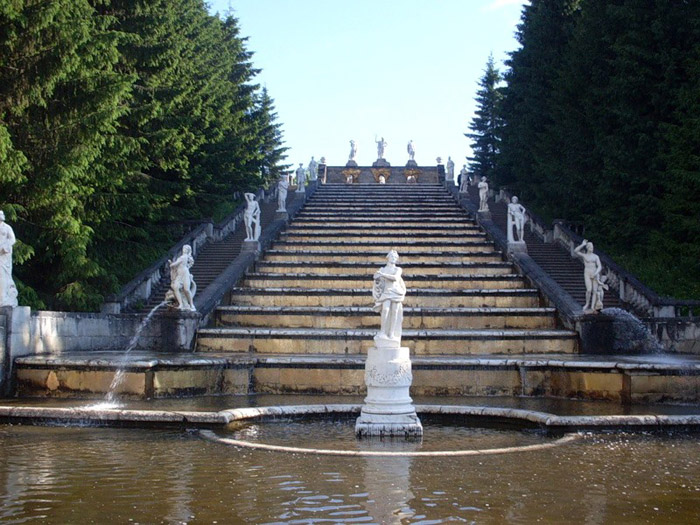 The most prominently positioned fountains of Peterhof are 'Adam' and 'Eve'. They occupy symmetric positions on either side of the Sea Channel, each at the conjunction of eight paths.

Several fountains are designed with the specific purpose of soaking visitors. Two take the form of gangly trees rigged with jets that activate when someone approaches. Another, disguised as an umbrella with a circular bench set around the stem, drops a curtain of water from its rim when someone enters to take a seat.

The same bluff that provides a setting for the Grand Cascade houses two other, very different cascades. West of the Grand Palace is the Golden Mountain (Zolotaia Gora), decorated with marble statuary that contrasts with the riotous gilded figures of the Grand Cascade. To the east is the Chess Mountain (Shahmatnaia Gora), a broad chute whose surface is tiled black and white like a chessboard.

The Grand Fountain Cascade, which is unique both technically and artistically, forms a decorative pedestal for the Grand Palace, designed by Rastrelli. It is the largest of Peterhof's palaces and it looks truly imposing when seen from the Lower or Upper Gardens, but in fact it is quite narrow and not overly large. Of its approximately thirty public rooms, several deserve mention. 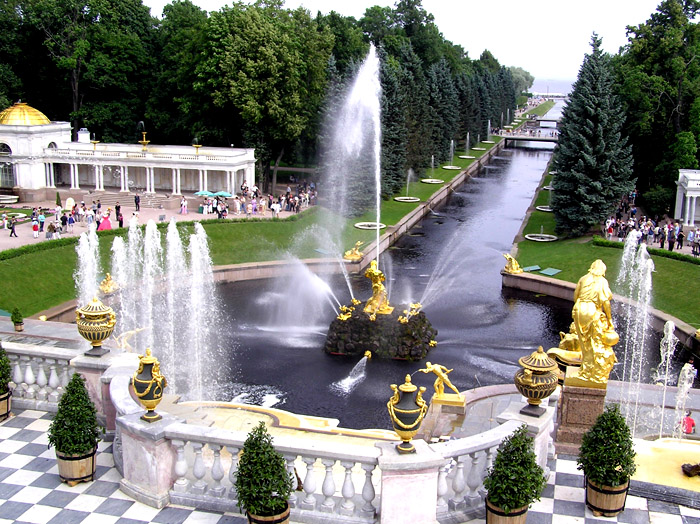 The Chesma Hall is decorated with twelve large paintings of the Battle of Chesma, an outstanding naval victory in Russian history. The pictures of the room illustrate the episodes from the Russo-Turkish War, 1768-1774. The room was the first memorial interior in the Russian architecture. The East and West Chinese Cabinets were decorated between 1766 and 1769. They exhibit objects of decorative art imported from the East. The walls were decorated with imitation Oriental patterns by Russian craftsmen, featuring Chinese landscapes in yellow and black lacquer.

Another room, positioned at the center of the palace, has the name of the Picture Hall. Its walls are almost entirely covered by a series of 368 portraits. The portraits represent young women dressed in different national costumes. The collection is interesting as a catalogue of period costume.

The Grand Palace is not the only historic royal building in Peterhof. The palaces of Monplaisir and Marly, as well as the pavilion known as the 'Hermitage', were all raised during the initial construction of Peterhof during the reign of Peter the Great. The Lower Gardens also contain a large greenhouse, and in the Alexandrine Park stands the palace of Nicholas I.