The Yusupov Palace on the Moika river was once the primary residence of the family in St. Petersburg. The building was the site of Grigori Rasputin's murder in 1916.

Over the years numerous well-known architects worked on the palace, and it is known for the number of styles mixed up under one roof. From 1830 to 1917, the palace belonged to the House of Yusupov, an immensely wealthy family of Russian nobles, known for their philanthropy and art collections. Thus in the time of Imperial Russia, the palace became known as the Yusupov Palace.

The palace is most famous, however, because of the actions of its last prince Felix Yusupov. The exact events surrounding Rasputin's death are much in dispute. The story, according to Yusupov, is that on the night of December 16, 1916 he, invited Grigori Rasputin to the Moika Palace. Felix made his plan with four other conspirators. Supposedly, they served Rasputin cakes and red wine laced with cyanide-there was enough poison in them to kill five men.

Concerned that Rasputin appeared unaffected, Yusupov retrieved a gun and shot Rasputin. Taking him for dead, the party prepared to leave. Yusupov returned a short while later to find Rasputin still alive. He and his conspirators shot Rasputin, at close range, three more times, but Rasputin was still attempting to stand back up and flee. Desperate they clubbed Rasputin in the head repeatedly with an iron bar, wrapped him in a blanket, walked outside and tossed the body into a rither. His autopsy supposedly found that neither the poison, nor the multiple gunshot wounds, nor the clubbing caused his death-instead he died of hypothermia. 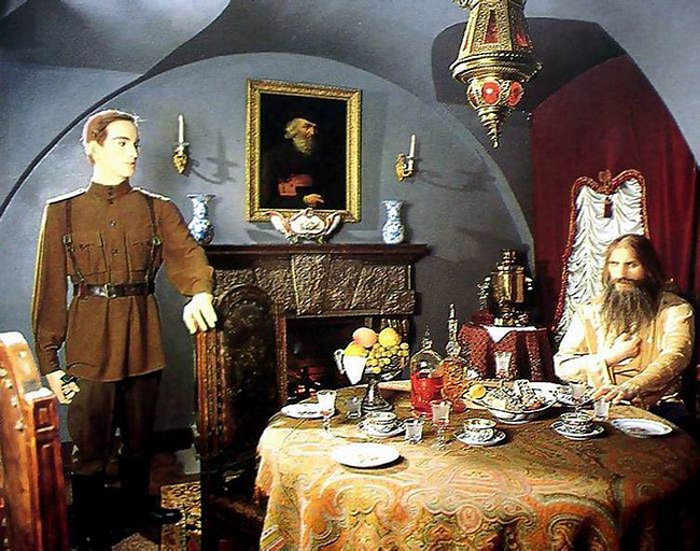 The Russian Revolution followed shortly after Rasputin's death and once the Soviets came to power, they confiscated the property of the nobles. In 1925, the palace was handed over to the city's Education Commissariat. While most nobles' palaces were converted to mundane use, the Education Commissariat decided to preserve the mansion as a public museum. Today the palace serves as a Palace of Culture for Educators and it also functions as a museum to Rasputin's murder. The courtyard where Rasputin attempted to flee from his killers is now occupied by a kindergarten playground adjacent to the palace.