The Cathedral of the Protection of Most Holy Theotokos on the Moat, known as Saint Basil's Cathedral on Red Square in Moscow has become part of the Moscow Kremlin and Red Square UNESCO World Heritage Site since 1990. The Catedral is a Russian Orthodox Church, built between 1555 and 1561. Its construction started on the order of Ivan the Terrible and was devoted to the capture of Kazan and Astrakhan. The Cathedral marks the geometric centre of the city. It was the tallest Church in Moscow until 1600.

There are lots of legends about the Cathedral but the most famous one says that Ivan the Terrible had blinded the builders so that they could not create anything to compare. 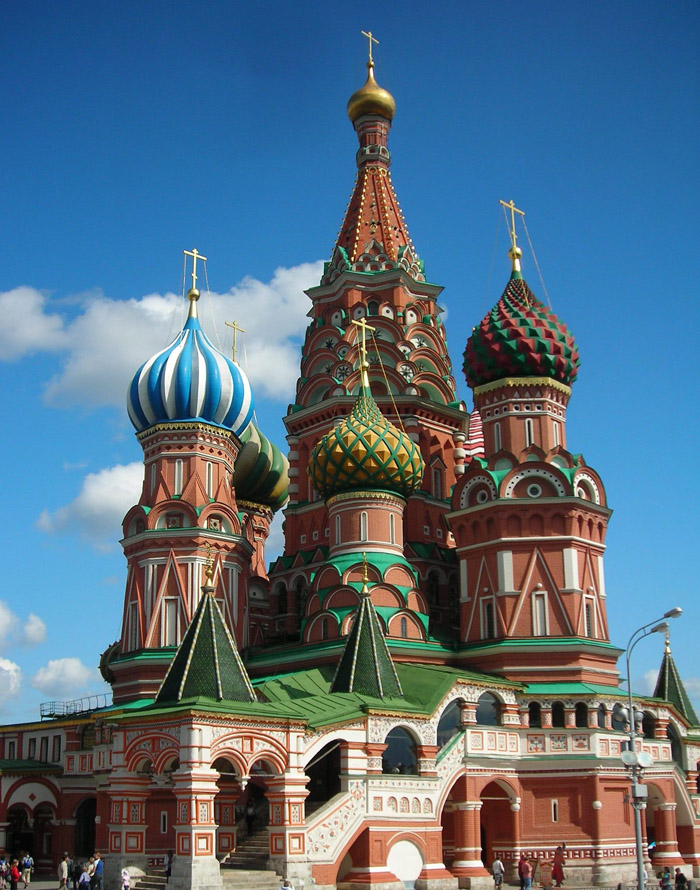 The original building, known as "Trinity Cathedral", contained eight side churches arranged around the ninth, central church of Intercession. The tenth church was erected in 1588 over the grave of venerated local saint Vasily (Basil). The original design of the Cathedral was different from what we can see nowadays. It was all white to match the white-stone Kremlin, and the onion domes were gold. In the 17th century a hip-roofed bell tower was added, the gallery and staircases were covered with vaulted roofing, and the helmeted domes were replaced with decorated ones. In 1860 during rebuilding, the Cathedral was painted with a more complex and integrated design, and has remained unchanged since.

The building's design, shaped as a flame of a bonfire rising into the sky, has no analogue s in Russian architecture: "It is like no other Russian building. Nothing similar can be found in the entire millennium of Byzantine tradition from the fifth to fifteenth century a strangeness that astonishes by its unexpectedness, complexity and dazzling interleaving of the manifold details of its design." The Russian national architecture in the 17th century was strongly affected by the character of Saint Basils Cathedral.

After the Revolution of 1917 the church was confiscated from the Russian Orthodox community as part of the Soviet Union's anti-theist campaigns. It has operated as a division of the State Historical Museum since 1928.